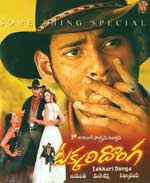 My alternate title for this post is: Move over Old Spice Man: It's Mahesh! In a Cowboy Hat! And Chaps! On a Horse! That should be sufficient information for anyone to watch this 3 hour unsubbed extravaganza of leather multiple times like I did. But if you are not into Cowboy Westerns (or should it be Cowboy Easterns?) and would need further encouragement to watch this wonderful movie, there is available on-line a subtitled version created painstakeingly by a fan, god bless them.
I happen to love Cowboy Westerns. It is one of those things that my sisters and I bonded with our Dad over. He loved cowboy movies starring John Wayne, James Stuart, James Coburn, John Ford, and Clint Eastwood and he grew up on Roy Rogers Serials. When we were kids he loved sharing his favorite movies with us. I think our family favorite was McLintock! starring John Wayne and Maureen O'Hara. (That movie is my dream Southie remake, Rajamouli, how'd you like to give it a try? Please!)
Clearly writer and director Jayant Paranjee is a huge fan of the genre as well because every possable Cowboy cliche and trope is irreverently put on display in Takkari Donga. Don't believe me? Just look:
﻿
﻿
﻿﻿
﻿﻿

If that's not enough for you wait 'til you hear about the plot. The film starts with Bad guys on horses dressed in black, lead by Rahul Dev chaseing down some men. They kill one and chase the other off a cliff in pursuit of information about a secret diamond mine.
Fast forward 18 years and you have the survivor of the fall waiting for Raja, played by Mahesh to come and rob a train. Raja shows up in time to singlehandedly rob the train. Next are a sequence of roberies and shootouts and daring escapes as the price on Raja's head climbs higher. He runs into two con-artists played by the lovely Bipasha Basu and Tanikella Bharani (I think he is in every movie ya?) They steal his money, but he manages to get it back after some more fights, shoot'em ups and daring escapes.
﻿﻿﻿﻿﻿﻿﻿﻿ ﻿﻿﻿﻿﻿﻿ 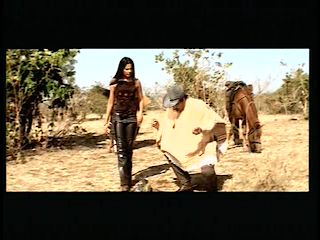 During one of his escapes Raja runs into Bhuvana played by Lisa Ray. She is seeking a fortunetellers advice about finding her true love. Raja overhears and immediatly begins teasing Bhuvana. Of course she takes an immediate dislike to him. Next Raja is hired by Bhuvana's Father to take her away from the town because the Bad Guy Shaka is after him and he fears for his daughters safety. Now Raja has to travel with an uncooperative female (shades of True Grit) while being chased by Shaka and his men, the Marshalls that are after him for the robberies, and Bips and Tanikella. 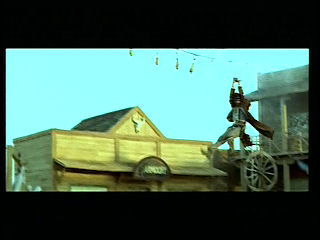 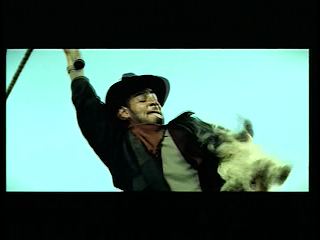 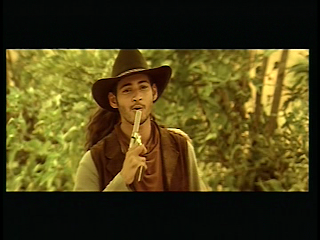 During all this Bhuvana tries to get Raja's pants off. Several times. Now I watched this without subs the first few times and I was allways curious what she was doing. I mean I know why most of us ladies would want to get Mahesh's pants off but Tollywood films usually aren't that risque. She never does manage to get his pants off. She should take some lessons from Raja. 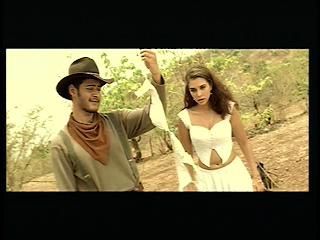 After all the fights, escapes and general riding around. (They always seem to end up back at the same town) Raja tells Bhuvana about his past and it turns out that the bad guy Shaka was the one that killed his father and sister. We also find out that Bhuvana has the map to the diamond mine hidden in her locket. 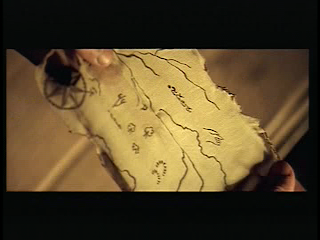 But Shaka catches Raja just as the map is burned up. He takes Bhuvana and leaves Raja on a horse with a noose around his neck! How many Cowboy movies have we seen that happen!  And you know there is gonna be snakes, rattlers maybe that will scare the horse into galloping away!

Now there is another daring escape,  a hazardous travers of a waterfall and a harrowing climb down a cliff. Finally Shaka and Raja fight it out in the diamond mine. And Rahul Dev meets another spectacular demise at the business end of a stalagtite. 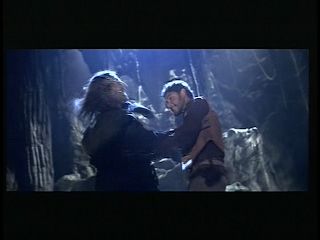 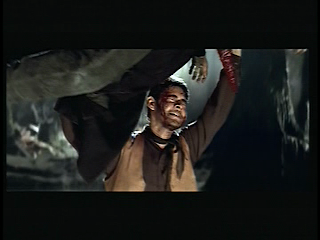 Besides all of these fabulous Cowboy western tropes, Takkari Donga has not forgotten it's Tollywood sensabilities either.  There are  the usual song picturizations. I have to say the music didn't stand out to me in this film, but the picturizations were great because they had Mahesh in all kinds of shiny fringed outfits and tight jeans. 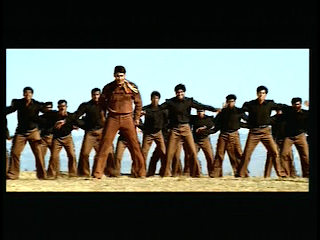 Ah Mahesh! I am waiting for your next Western. In a cowboy hat! And Chaps! On a Horse! 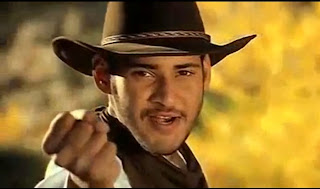 Thanks for visiting. I would love to read what you think.