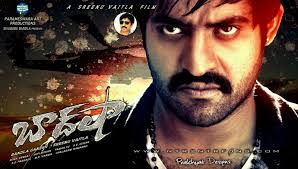 Baadshah hit the theaters in Minneapolis with a bang. I am used to watching Telugu movies at a discount theater, but recently (first with Prabhas' Mirchi) the promoters have made an effort to show Telugu films here at a first run theater. They even had Baadshah's premier show at the biggest screen Carmike's Big D Digital screen. It was AWESOME! So wonderful for me to see my favorite hero on a huge screen with excellent sound for a change. Thank you TeluguVinodam for bringing Telugu films to a theater they deserve.

First let me remind my readers that Jr. NTR is my Favorite amongst favorites. And I have to also qualify my review with the fact that I do not understand Telugu so while I can usually figure out the plot quite well, I miss alot of the humour, especially Srinu Vaitla's dialog heavy humour. So for Baadshah I can only comment on the visuals and can't really give an account of the humour except that judging by the audience reaction it really really worked. I saw the movie twice so far and both times the audience was howling with laughter throughout the movie especially the second half.

The story follows Tarak as Baadshah, an underworld Don who is seaking revenge on Saddhu Bhai played by Kelly Dorji. Through a flashback in the first half (introduced in a voice over by Mahesh Babu) we find out the relationship between Saddhu Bhai and Baadshah, Baadshah is set up as a rival don to Saddhu Bhai. Sadhu Bhai then kidnaps Baadshah's father played by Mukesh Rishi and kills a close family friend played by Adhitya. Baadshah hatches a plan that will disrupt Sadhu Bhais plans for terror attacks throughout India and exact the revenge he wants. The plan involves Janaki played by Kajol. Janaki is the daughter of the police commissioner of Hyderabad played by Nasser..

The second half brings the story back to Hyderabad where Nasser runs his  household like a bootcamp. Enter Brahmanandam a hapless ne're do well member of the joint family. Tarak posing as a wedding planner convinces Brahamandam that he is in a dream and gets him to finally exert himself within his family and job as an IPS officer, The results are hysterical, like I said judging by the audience reaction the comedy really works. Tarak uses Brahmandam to help foil the evil plot of Sadhu Bhai while also disrupting Janaki's arranged marriage to a crooked cop, played by Navdeep. Another flashback in the second half involving a cameo by Siddharth reveals the real reason Tarak is going after Saddhu Bhai.

I am not a huge Kajal fan but I really liked her in this. She was cute and got lots of laughs especially in the first half.  Her character remained relevant throughout the film so the usual disappearance of the heroine did not happen.

The action in the film was well done. Tarak is always very good at fight sequences. The editing of the fights was done really well so it was easy for the eye to follow.  I couple of the fights had some fun moments, the kind of humour I like in Tollywood fights. For example, once he bent a guys leg around and grabbed his shoe and beaned a guy in the head with it. And he made someone pass out just by glaring at him.  I just love stuff like that.  The only draw back to the fights was when he was shooting during the interval bang and the climax fight, he was able to shoot almost everybody by walking strait at them. Nobody seemed to get a shot off back at him.  I think it would have been more thrilling if he had to duck and jump behind things to avoid getting shot. Over all the action was well executed.

The best part for me though was the songs. Tarak finally got some interesting choreography. His last couple of movies it seemed like the choreography had gone abit stale. The music by Thaman is great. All the songs are upbeat and allowed for some very energetic dancing by Tarak. My favorites were Sairo Sairo, Banthi Poola Janaki, and Rangoli Rangoli.  The Item Welcome Konakam and Diamond Girl were also good fun.  The Title song Baadshah was alittle too reminiscent of Shah Rukh Khan's Don in how it was picturized, but I think that was intentional.


I have to say I am a huge fan of Tarak's curls so I was very unsure of his hair getting straitened out.  But he looked fabulous. His styling was very well done and he looked trim and fit. Very pleasing to the eye. His performance was great, you can tell he puts all his energy and focus into every scene. He has such a presence it is hard for me to notice anything else the first time I watch his movies.
The supporting cast included Ashish Vidyarthi, Tanikella Bharani, Suhasini and Pradeep Rawat. M.S. Narayan plays a director in a funny send up of Ram Gopal Varma in the first half. Ajay also shows up but his part is too small. I can always use more Ajay in a movie.
Baadshah is well on its way to being a super hit for Tarak. It is already closing in on a million dollars in sales in the overseas market. I will do my part and try and see it one more time this weekend. All in all a great masala entertainer. It was so great to finally see a Telugu film in a top-notch theater. The only thing that would have improved the experience would be subtitles and samosas. I can't wait for a subtitled DVD so I can laugh along with everyone else.